An angel stands besides a pool of water while pouring liquid from one gold goblet into another. His left foot stands on dry land, while his right foot is dipped in the water. He wears a long white gown with the symbol of the Trinity on its breastplate; his shiny gold hair has an all-seeing eye woven into it, and a halo-energy field radiates a circle of light. To the angel’s left grows a thick rush of water lilies, with two in full bloom; to his right, a footpath leads through a green meadow, up a steep ascent to a distant mountaintop on the horizon. There, the sun rises in the shape of a crown, likewise radiating a halo of golden light.

As Death casts its inevitable shroud over our physical beings, and we awaken to find ourselves in a world of eternal beauty on the “other side”, so too with our conscious minds; when we cast off the shackles of materialism and ego, we can awaken to behold our “other side”, which is our true Selves—”the better angels of our nature,” as a wise man once put it. The angel depicted in Temperance is, for lack of a better term, our spiritual “tour guide” who has come to give us a preview of heaven’s “coming attractions.”

The word “temperance” is rooted in the Latin noun temperantia, which means “self-control” or “moderation”; describing the actual process, the active verb temperare means “to dip, to soak, or to temper” as when tempering, say, a steel blade. Both suggest the meanings typically ascribed to the card: Balance, equilibrium, the reconciliation of the opposites, moderation in all things, stillness after transition, and the split mind made whole following our encounter with Death.

While our angel is a water-bearer, the astrological sign attributed to Temperance is Sagittarius the Archer, common sign of fire. (For this reason, the angel is said to be Michael, archangel of fire and angel of the sun.) This might seem odd, but Temperance is, as mentioned, about reconciliation and resolution. When tempering steel, one needs water to harden the metal once it has been pulled out of the fiery forge and formed by the hammer. In our own lives, we sometimes need to temper our anger with serenity, and our restlessness with patience—especially in our day, when our sense of time has compressed to such an absurd degree that we actually get annoyed if we have to wait longer than a few seconds for, say, a Web page to load, or to complete an online purchase. Just as the misperceptions of our physical world test our patience, so too Temperance tests our ability to dissociate ourselves from those feelings of discomfort and offense that distract us from our appointed work. This is why the path of Temperance, which connects solar Tiphareth to lunar Yesod along the central pillar of the Tree of Life, is known as the Testing or Tentative Intelligence; if we are willing to subject our preconceptions to objective scrutiny and even some constructive criticism—putting our own beliefs “to the test,” as it were—we may just discover that that our apprehension of the world, and of the role we are appointed to play in it, is more fully realized, and our sense of self-awareness more enhanced than we had previously thought.

The Hebrew letter assigned to Temperance is Samekh, literally a “tent peg” but also a “prop” or “support.” Just as an ancient traveler needed to properly secure his tent to guard against the fierce scirocco windstorms that raked the desert, so too we need a sturdy source of support when the winds of fortune seem in danger of knocking us off our moorings. In this case, we are talking about the exercise of spirituality: Prayer, meditation, yoga, breathing exercises, or any other metaphysical pursuit that encourages us to “slow down,” hit the “Mute” button of the material world, and visualize living in the moment of Now that exists outside of space and time. 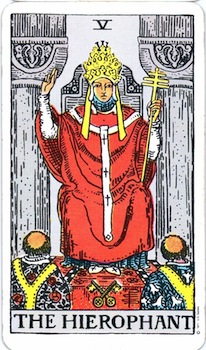 Recall that the letter assigned to The Hierophant is Vav, a “nail” or “fastener” which, much like Samekh the “prop” provides us with a structural support—not for our outward lives but our inner ones.

Meanings in a reading, besides those already mentioned, can include balance of spiritual forces, steadiness in effort, a conflict resolved, patience in doing, “to everything a season”, a new phase of life has begun; but also, life out of balance, intemperance of body or mind, effort abandoned, inferior work, unwillingness to let go of a bad situation, the destructive force of ego, a world out of balance. As the Hierophant invokes God’s blessings upon us in the heavenly plane, so too do we receive His blessings in ours. Temperance can be seen, then, as our guardian angel made manifest. A good thing, too, for we will need his strength and support as we head into the final cards of the Trumps Major. As he bears us up on wing, let’s strap ourselves in: As we will see tomorrow, there will be a few bumps in our flight before we reach our destination.