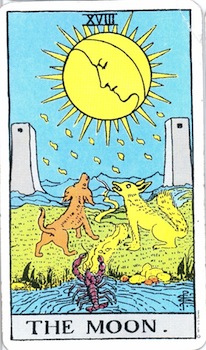 Night on a grassy but otherwise barren landscape. A dog and a wolf howl at the sky, and behind them a purple crab emerges from a watery swamp. A trail snakes between a pair of watchtowers, into distant mountains cloaked in shadows. Above it all, the moon glares down ominously upon the land, emitting 32 rays and 15 sparks of light.

We must take care when proceeding on this path, however, for in dreams we can be as thoroughly deceived as we are in our waking existence. Take a close look at this card again. We think we see a bright full moon in the sky here, but if we examine the image carefully, it could just as easily be a crescent moon that is only partially obscuring the light of the sun in a solar eclipse. The moon only reflects light; it doesn’t emanate any rays of its own. Compare The Moon of this Trump with the rayless moon depicted in the Eight of Cups:

In any event, this image demonstrates how easily we can fool ourselves with the power of suggestion, and that we should never stop questioning our assumptions. After all, we’ve all seen the moon shining in broad daylight from time to time!

The Hebrew letter assigned to The Moon is Qoph—literally, “back of the head,” or generally speaking, “the unconscious mind.” The Moon, then, beckons us to overcome our longstanding “fear of the unknown” because now that we have unburdened ourselves of ego’s trickery, we realize that there is nothing to fear and everything to know about our true Selves when we explore the “other side” of dream-consciousness. This takes some time, but with patience and dedication, a notebook and a pen with which to record our dreams, and perhaps the guidance of an experienced mentor, we can gradually condition our unconscious mind so that we become architects of the dream, and not merely passive observers.

An unexplored unconscious is at the reason why so many of our dreams seem so terrifying—because we are swimming in uncharted waters, and when dreams occur, we feel that we have no control over what we experience, and all is shrouded in mystery. As the Talmud states, “An unexamined dream is like an unread letter.” But there is another way—what  Jungian psychoanalysts refer to as “active imagination.” As we can train our conscious minds to formulate a certain thought or to perform a certain calculation, so too with the unconscious: It’s another application of the “as above, so below” principle—only this time, it’s entirely contained within our individual psyches.

C.G. Jung began formulating his theory of the four stages of human consciousness around the same time that the Waite-Rider Tarot deck was first published, and interestingly, we can see them depicted, somewhat obliquely, both in the images and in our symbolic relationship to them:

The crab, which Arthur Waite evocatively refers to as the “tendency that is lower than the savage beast,” represents the collective unconscious, the most primitive form of cognition—the primordial pre-consciousness of the deep.

The dog and wolf are more highly evolved than the crab—they can think for themselves after a fashion, but they still often react in purely instinctual ways, baying at the moon for no apparent reason. Therefore they represent the individual unconscious: the untrained mind of the dreamer, irrational and reflexive.

The individual conscious is the seeker—each one of us as individuals. We humans are sufficiently cognizant to build a road and some watchtowers—no dog or crab can do that!

The collective conscious is represented by the road—more exactly, by the whole of humankind that has preceded us along that road, and every soul that has completed the journey and returned to the heavens from whence all came, each individual now existing as a shining immortal star in an ever-expanding universe of spirit.

Could it be that that the road that wends its way past the towers and into the hills might lead us to The Hermit on the mountaintop?

The astrological sign attributed to the Moon is Pisces the Fishes, the water sign that is mutable—like water itself, which freezes into ice or which evaporates into steam, depending on whatever external influences are exerted upon it. The unconscious mind is similarly mutable—we simply need to acquire the tools to influence it positively for our own happiness and to acquire a greater knowledge of our true Selves. The unconscious mind is actually the foundation of all true form and substance. This sounds counterintuitive, but we cannot apprehend everyday “reality” without consulting the unconscious, for it is within this realm that we are most receptive to God’s wishes for us, and it is in the realm (generally) that He reveals Himself most fully to us: in the Talmud, God is said to declare, “Although I have hidden my face from Israel, I will communicate with him through dreams.” With that blessing, we are more capable of “divining” the difference between reality and illusion when we awaken from the dream. This is likely why the path of The Moon, which leads from Netzach on the Pillar of Mercy to Malkuth in our material world, is known as the Corporeal Intelligence—it allows us to assign form to the created world, and it endows us with the ability to separate reality from illusion. This is much easier said than done!

The Moon is resplendent with symbolism. The crab is reminiscent of the scarab beetle that was worshipped in ancient Egypt for its cleansing powers (it feasted off animal dung). The wolf and the dog are the wild and domesticated forms of the same creature, showing that while we may consider ourselves more sophisticated and learned than our primitive ancestors, we are equally capable of being driven to un-reason by fear and misunderstanding. The twin pillars in the distance represent—yet again—the polar opposites of yin and yang  that we have been sent to reconcile, and the 32 rays emanating from the moon (or is it the eclipsed sun—can we really know for certain?) represent the total number of Sephiroth and their corresponding paths that comprise the whole of the Tree of Life. According to the Sefer Yetzirah, all forms of Divine intelligence that have ever been known, and can ever be known, exist therein.

Once again: As above, so below. The reconciliation of opposites and the reunion of man and God is our highest, and only, true calling in this life.

Meanings of this card in a reading can include “sweet dreams”, the power of the unconscious, the road to enlightenment beckons, fears overcome, and active imagination; but also nightmares, madness, the ego triumphant, return to the swamp, and death of the soul. The only nightmares we experience in life are of our own making. The Moon reminds us that as she transits through “phases,” so too do we in our lives. We are approaching the final phases of our earthly consciousness, both individually and collectively. Now is the time to embark on the final sojourn to God-consciousness; it is within our vision, and we see the road that leads to it. As Christ spent three days plunged in darkness before the miracle of the Resurrection, let us likewise fulfill our destiny and step into the darkness—from whence we shall emerge into a radiant golden light.