Today I woke up to the kind of glorious spring day we all so often take for granted in Southern California, and while I was waiting for my morning tea to brew, I meditated for several minutes before dealing my daily Tree of Life spread. It’s a daily routine to which I have become accustomed, and which I highly recommend to all fellow seekers—because the “first thing in the morning” is the optimal time to engage in this kind of spiritual path-work: Before all the e-mails and the text messages and the phone calls and the TV news shows distract us with all their cognitive “white noise,” and when our minds are as close as they will be to a “blank slate” all day.

Anyway, I had nothing particular in mind for my “conversation” with the cards today, and no answers needed to any urgent questions—just a symbolic “snapshot” of my life, with maybe a thought I could keep in mind during my daily walk. With that in mind, I laid down the cards, again omitting reversals for the sake of simplicity (we’ll start working with reversals a couple of weeks down the road):

Wow. It would hard to divine a reading to this spread that would suggest that today would be anything but enjoyable, pleasant and productive for me. (For what it’s worth, the most likely “key” card in this spread would be the Eight of Pentacles since it occupies its “proper” position (the eighth card to be dealt) on the Tree. This station is also governed by Mercury and signifies the first stirrings of human intellect, suggesting a greater sense of self-awareness derived from intellectual pursuits. A favorable spread for a nonfiction writer!)

Two things struck me about this layout: First, the absence of Major Arcana cards—an uncommon occurrence in a spread of this size since they comprise over a quarter of the cards in the deck—which suggests that the rewards and felicities of my life today would be likely felt in the here-and-now of everyday life, as personified here by the “final” card of the spread—the Prince of Pentacles. Second, the court cards lined in a row along the middle pillar is likewise unusual—I’m not sure I can recall the last time I’ve ever seen a layout like this, if ever. Court cards pose some of the thorniest interpretive challenges in Tarot since they can stand for real people as well for trends, events, ideas and actions in the life of the querent. So, seeking a little additional clarity, I reshuffled the deck, and this turned up: 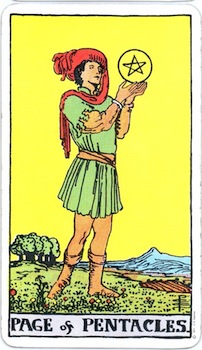 Of course, it’s the Prince’s sister! Why wouldn’t she be included at the party?

Jokes aside, the Prince and Princess represent, respectively, the “earthy” and “airy” elements of earth, the animating breath of life and the fruit and fauna of the soil that nourish and sustain us. They’re also the “final” court cards of the Tarot (Pentacles being the “final” of the four suits), and as such, they often signify the conclusion of a matter and/or the commencement of a new one. Perhaps they have come to provide a hint of what this might be in my own life?

While writing this, a thought came to mind. The card in the “middle” of the spread—the Knight of Cups—was one I used to signify myself in Tarot spreads when I was a young man, mostly due to the slightly dreamy and introspective meaning of the card. Above him is his “father” in the suit, the King of Cups, which is governed by (you might have guessed) a water sign. Likewise (perhaps?), my actual birth father was born under a water sign. My father passed away several years ago; could this be the reason why this symbolic “father” is positioned so high in the spheres, beyond my powers of earthly perception?

Continuing downward, directly beneath the Knight is the Queen of Swords, which is governed by an air sign—and in case you haven’t guessed, my actual birth mother was also born under an air sign. When I was younger, and much less confident of myself and of my place in the world, my mother provided me with endless hours of support and constructive advice. Compared to my father, who could be cold, critical and distant, she really was my foundation—my “rock” of strength—when I was in my teens and twenties. Ironic, then, that this “mother” card occupies the “Foundation” sephira, Yesod, directly beneath that dreamy young Knight to whom she provided direction and guidance many years ago.

My mother is 85 now, and in reasonably good physical health, though her mental state is undergoing that slow process of cognitive dissociation from everyday reality that we often see in very elderly people. Perhaps, the Prince and Princess are telling me, that I may one day soon need to be her foundation, her “rock” of support, as her earthly life draws to a close.

It’s funny how I originally titled this post, “Reflections on the Princess of Pentacles” since I’ve barely reflected on her at all. Then again, perhaps this wasn’t her function in this reading. Perhaps her only purpose here was to remind us of the impermanence of life in this sphere of consciousness, of the eternal cycle of death and rebirth that flows forth from it, and of the obligations of life as well as its felicities. Let us strive, then, to enter into each of our pursuits, whenever we can, in the same spirit of joy and wonder that our Princess evinces when she gazes upon her Pentacle. It certainly beats the alternatives!

One thought on “Reflections on the Princess of Pentacles”