I had the strangest dream last night. In it, I was staying in a hotel—it’s more like a resort—where, in real life, I used to stay every year while attending an annual business conference. The hotel, and the conference, were two things I most enjoyed in my old corporate job, and I have only fond memories of the place (except the fact that wireless access could be a bit dodgy—the hotel was out in the countryside, some 30 miles east of Monterey). Anyway, in my dream, I  opened the door to my room, and realized that the room had been burglarized. In particular, my camera had been stolen, which meant I would need to drive into town to buy a replacement since one of my functions at the business conference would be (as it was in real life) to take photographs. I soon found an electronics shop and bought a replacement; then I returned to my room to drop off the camera before departing for dinner. When I returned to my room, someone had burglarized it again—my new camera was gone, and all of the room’s bedding and linens and bath towels had been scattered all over the floor. Stumbling amid a pile of crumpled sheets, I resolved to report this problem to the front desk when the door to  the room opened, and I was confronted by a very short man (who resembled an elf) who told me, “You must get out of here at once—you are in danger! Do not return until we’ve caught the criminals.” “Well, how will I know when this is?” I asked, at which point I woke up, profoundly glad it was only a dream.

As a thought experiment, and as a tool for attempting a little dream analysis, I decided to lay out my go-to six-card spread to see what the Tarot could instruct me about my dream. I’ve written about this before, but in case you’ve missed it, the cards are laid out around a Significator card (signifying the querent) in the following sequence:

The meanings of the individual cards, are, roughly:

Here are the cards that made an appearance in response to my request today: 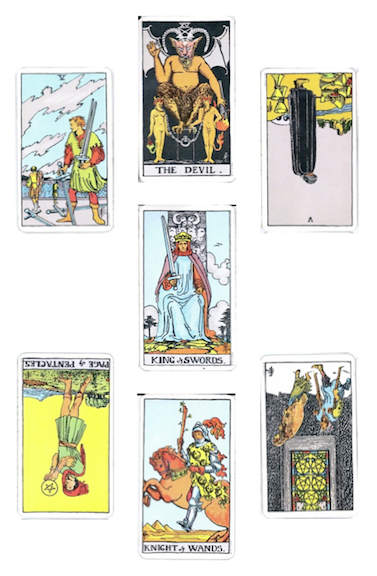 Now, we know that there is no such thing as a “bad” Tarot card per se, but certain cards in combination within a spread can spell a troublesome reading, and this one was so awful, I had to laugh out loud after laying it out. The number “5” is the most troublesome among the numbered ‘pip” cards of the Minor Arcana because the number signifies the alchemical process of “perfection rendered imperfect”: An impossibility in metaphysical terms but one that occurs when spiritual energy becomes attenuated and materialized in its descent down the Tree of Life in the corruptible and mortal body of humankind, with all the ego-driven wars, conflicts and aggression attendant to it.

Any time a Five appears in a spread, it  suggests difficulties for the querent, and this spread has three of them in a row! The fact that two of them are reversed doesn’t much change the overall meaning of the layout—it simply smoothes out a few rough edges from it. Without dwelling on the details, in the realms of thinking, feeling and perceiving we can see self-pity (Five of Cups), defeat (Five of Swords) and destitution (Five of Pentacles) as the respective forces governing the dream, and the Page of Pentacles reversed (the “sensation” card among the members of the Tarot court) could easily be a stand-in for the elfin man who warned me to get away from the scene at once. The dream is founded, the cards suggest, on a creative enterprise in which I was once engaged but which has since passed (Prince of Wands, creative energy in transition), and the outcome—assuming we never awaken spiritually from this kind of dream—is to live in a world of materialism and greed (The Devil), where we lust after things we cannot possibly possess. That’s the significance of the camera, a device that records the occurrence of things in the single dimension of time: It’s a dimension we lose immediately once we think in terms of time because it is never static and always in motion. We can cling to imitations of time—the photographic image—but the real thing is invisible and ever-fleeting; and this is why we are well advised to view our lives instead through the prism of an existential Now that is everlasting and ever-unfolding.

Less abstractly, the spread reminds us of time’s ability to deceive as well as to inform us, and in this case, it asks the querent just how much he really liked that last real-life job of his—specifically, whether he might be waxing a bit too nostalgic about work that was a source of a great deal of grief and anxiety in his life (the Fives) but which paid him well (The Devil). Those sheets and towels on the floor of the hotel room are meant to keep us clean, warm and dry. Strewn across the floor and trampled under foot, they’re soiled and hence are of no practical use. Work without any higher purpose than financial gain is like that—a material trap that tangles us up in a soiled spiritual morass of our own making. A life thus lived is literally hell on earth.